Welcome to the home of The Bitter Sound, a dark comedy podcast produced and presented by Davian Dent.

From an early age, Davian displayed a penchant for the amusing and surreal, and enjoyed listening to the early radio works of the late great Kenny Everett. This, combined with a rather unexplained interest in both punk rock music and prog rock concept albums led to him spending a lot of the mid-late 1970s recording various random bits of audio on cassette and splicing them to create new recordings – early remixing, if you will… These early cut-ups were often overdubbed with the ad-libbing of random bits of self penned prose, often with a couple of friends joining in after school…

The heady optimism of change from these days soon gave way to the drudgery of the spending the next two decades spiralling in a seemingly endless circle of unfulfilling jobs with computers and promising but somehow always underachieving bands. Then, towards the end of the 90s and a healthy diet of the audio works of Chris Morris (in particular the radio series ‘Blue Jam’), Davian found himself creating the sort of cut-up & remix music that would shortly be recognised in the emerging arena of ‘mashups’ and ‘bastard pop’. Going under the name of Bitter Sound Foundation, several works were featured and lauded by a surprisingly large amount of people, most notably James Hyman and Eddy Temple-Morris from The Remix Show on London’s XFM 104.9 radio station.

The years between then and now are very much another story for another day so let us fast forward to more or less now, where thanks to the birth of podcasting, free distribution of one’s own material is now a matter of relative ease… Technology and the world has in effect finally caught up with the all the things Davian has been doing for years, only without the endless tape splicing, relying on other individuals and haranguing of companies to get material distributed.

Davian is also a strong advocate for promoting a better awareness of mental health. 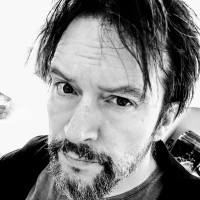 Writer, producer and presenter of The Bitter Sound show.